Tidy Up! And 100 other ways Brian Eno could inspire creativity in the era of ‘real time’ and ‘big data’ 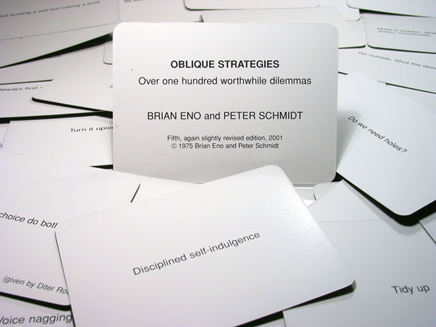 If you have read my modest collection of posts so far you will have gathered that I am a big fan of John Kay’s ‘Obliquity’. It seems to me that Kay makes an irrefutable case for the power of unintended consequences across all facets of business. I take three key points from Kay:

-Most of our business practices and processes don’t reflect this reality.

My belief in the power of unintended outcomes goes back to my reading all of the great Scottish enlightenment thinkers for my degree at Glasgow University in the early 90’s.  I have also spent a great deal of my career working with quantitative market research data and, therefore, working within a business culture that is striving for reliable ‘prediction’ of outcomes….

So I feel a powerful ambivalence when I reflect on much of the new thinking around ‘real time’ and ‘big data’ in marketing and NewMr.  Big data promises unprecedented support for decision making. Many feel that it is struggling to deliver on that promise. We are simply overwhelmed by the complexity of big data. Behavioural economics and decision science tells us that we don’t like novelty and uncertainty. Marketers and researchers are people too. We are prone to all of the same biases (confirmation bias, availability heuristic, representativeness bias, bounded awareness etc. etc.) as the people we increasingly choose to characterise as  ‘irrational consumers’. So it’s natural that we seek out ways of simplifying and reducing the ever growing river of data to manageable levels.

But one unintended consequence of this need for reduction is that we become over-reliant on a rapidly growing range of algorithms and dash boarded decision tools that narrow our focus to the point where we marginalise the richness and complexity that was supposed to give big data its power in the first place. Serendipity drives a great deal of game-changing  thinking and innovation. It would be a big mistake if we let data technology  crowd oblique thinking out of our professional lives.

Of course, it doesn’t have to be like this. We don’t have to be bounded by the direct routes offered of our dashboards and KPIs. Technology and creativity should go hand in hand. Here is Brian Eno being interviewed by Jeremy Paxman on Newsnight in 2011 . Eno’s whole career is founded on harnessing new ideas and technology to invent new disciplines and genres.  He was on Newsnight to talk about whether creativity is heightened in challenging economic times. But in his own oblique way he ended up making more interesting connections about technology’s role in his latest projects around ‘generative music’ and open source methods of creative collaboration.

Eno gets these breakthrough outcomes because of the way he approaches new information and technology. Obliquity is built in to everything he does. Back in the 1970’s, along with the British painter Peter Schmidt, Eno realised that the pressure introduced by commercial objectives and deadlines (the clock ticking on expensive recording time in the studio etc.) was causing him to lose touch with his most productive methods of working.

The solution was the development of a set of Oblique Strategy Cards that were designed to prompt and prime him to explore alternative ways of working and consider alternative creative routes and solutions:

The Oblique Strategies evolved from me being in a number of working situations when the panic of the situation – particularly in studios – tended to make me quickly forget that there were others ways of working and that there were tangential ways of attacking problems that were in many senses more interesting than the direct head-on approach. If you’re in a panic, you tend to take the head-on approach because it seems to be the one that’s going to yield the best results. Of course, that often isn’t the case – it’s just the most obvious and – apparently – reliable method. The function of the Oblique Strategies was, initially, to serve as a series of prompts which said, “Don’t forget that you could adopt *this* attitude,” or “Don’t forget you could adopt *that* attitude.”

You can read more on the origins of Oblique Strategy cards here or on Eno’s own website. David Bowie is also a great fan of obliquity. Here he is discussing the ‘cut up’ techniques that are a core part of his creative process.

Does any of this sound familiar? If Eno recognised these blockages and pressures in the liberal avant garde music scene of the 70’s what is the impact on the humble time poor research or marketing exec in the world of real time big data?

Eno and Schmidt envisioned oblique strategies as a collaborative process from the outset. There are also lots of places where you can access the original cards and user contributed strategies online. Try this one.  You may think, ‘yeah that’s OK for Eno and Bowie’… But there are remarkably few of these cards that won’t make you think about your own work in a different way. Here is a selection of the ones I was presented with when I tried it today:

-‘state the problem as clearly as possible’

-‘don’t be frightened of clichés

-‘use your own ideas’

-‘How would someone else do it?’

Give it a try, hopefully you may never look at your dashboards and KPI’s in the same way again…