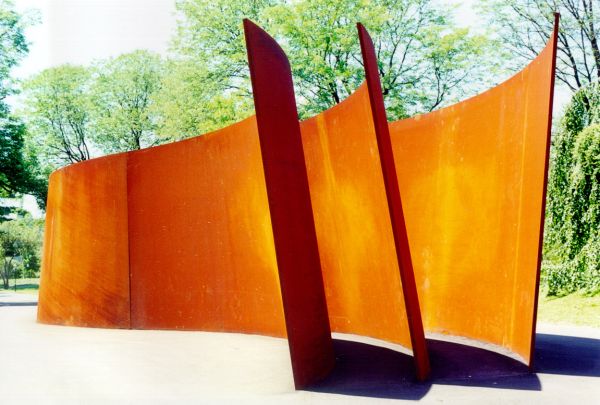 I love modernism. I am the kind of guy who instinctively tweeted ‘SAVE PRESTON BUS STATION!‘ when I heard on Radio 4 that it is going to be demolished (its since been saved for the nation). My favourite place in London is the Barbican.

Being a fairly typical 40-something agency bod (heavy rimmed glasses, a growing collection of tweed jackets and a degree in politics) l have, of course, developed a well -honed rationale and narrative for my love of modernism: it’s about championing a grand vision and utopianism; and lamenting that this ambition has been lost in our more pragmatic era……

But deep down I know it’s about something else: childhood memories and nostalgia. When I was a kid we lived in Cumbernauld, a New Town on the outskirts of Glasgow. We moved away when I was nine.

So, when I am intuitively navigating the labyrinth Barbican walkways (and wondering why everyone else finds it so difficult…) I am probably riffing off memories of my 1970’s childhood: shopping with my mum and my sisters with my brother in his push chair, lunch in the cafeteria at Woolco (the long lost department store big brother of Woolworths) or walking through the town centre to the Wimpy Bar with its red Formica tables and giant plastic tomatoes dispensing ketchup.

Passing through Cumbernauld a few years ago confronted me with the reality: nostalgia was strong but the utopian vision doesn’t stand up. On the Channel 4 programme ‘Demolition’, the entire town centre (conceived as one ‘mega-structure…) was voted the UK’s most hated building. Cumbernauld is now the preeminent case study, among countless others, of modernist utopianism gone wrong. Contrast the architect’s vision and the present reality 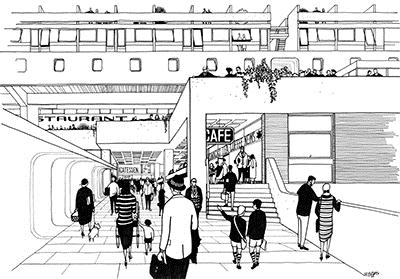 So how can modernism go so wrong? Of course, there are many reasons. But in his recent book Obliquity, John Kay offers a powerful explanation of how modernism is just one example of a much wider arrogance and tendency to oversimplify the world.  Reminding us of ‘Isaiah Berlin’s famous distinction between ‘the hedgehog – who knows one big thing- and the fox- who knows many little things’ (pg 132) he argues that good decision makers are the ones who recognise the limits if their knowledge.

Utopian modernism is a prominent example of hedgehog thinking:

At first sight, visionaries who seek to rebuild whole cities seem engaged in extraordinary feats of imagination. But in reality Le Corbusier’s schemes were characterised by a few ideas pursued with obsession. Interactions among people are critical, their organisation necessarily complex, our understanding of them incomplete. The planning of Le Corbusier, or Robert Moses, can be based only on a crass simplification and the repetition of familiar themes

Kay extends his argument for a more oblique approach to decision making across all disciplines and walks of like- social and economic phenomena are simply too complex to be approached in any other way. Everywhere we look, the paradoxes of obliquity and unintended consequences challenge our overly rational and direct approach to the world: the happiest people do not pursue happiness, the most profitable companies are not the most profit orientated, the wealthiest people are not the most wealth orientated……

Of course, Kay’s ideas on obliquity also have profound implications for how we view our professional and business life. In the world of business big ideas and simple, easily accessible, models are ubiquitous. As Kay puts it:

…explicit hedgehogs who claim to predict the future will always attract a larger audience than eclectic foxes who acknowledge they can’t, even if the larger audience learns nothing from the predictions’ (pg 133)

But Kay’s argument is that ‘adaptation is smarter than we are’. Our big ideas, models and abstractions are, in reality, spurious attempts at predicting business outcomes. Obliquity may seem chaotic, but it is the truly dispassionate real world approach- ‘because it acknowledges the universality of uncertainty and complexity’.

‘Give me a one handed economist’ goes the saying, but careful judgement really is a matter of ‘on the one hand and on the other’

So, back to Preston Bus Garage… Maybe I am hard wired to love the aesthetics of modernism’s finest achievements. After all I live in a 1960’s townhouse….But I cant take any credit for saving Preston Bus Station.  I didn’t sign the petition. I may like it’s futuristic looks. But I don’t live in Preston. And maybe the people of Preston have worked out through decades of experience what the visionaries and planners could never know: that Preston Bus Garage is simply not a very nice place to wait for a bus in the 21stcentury.