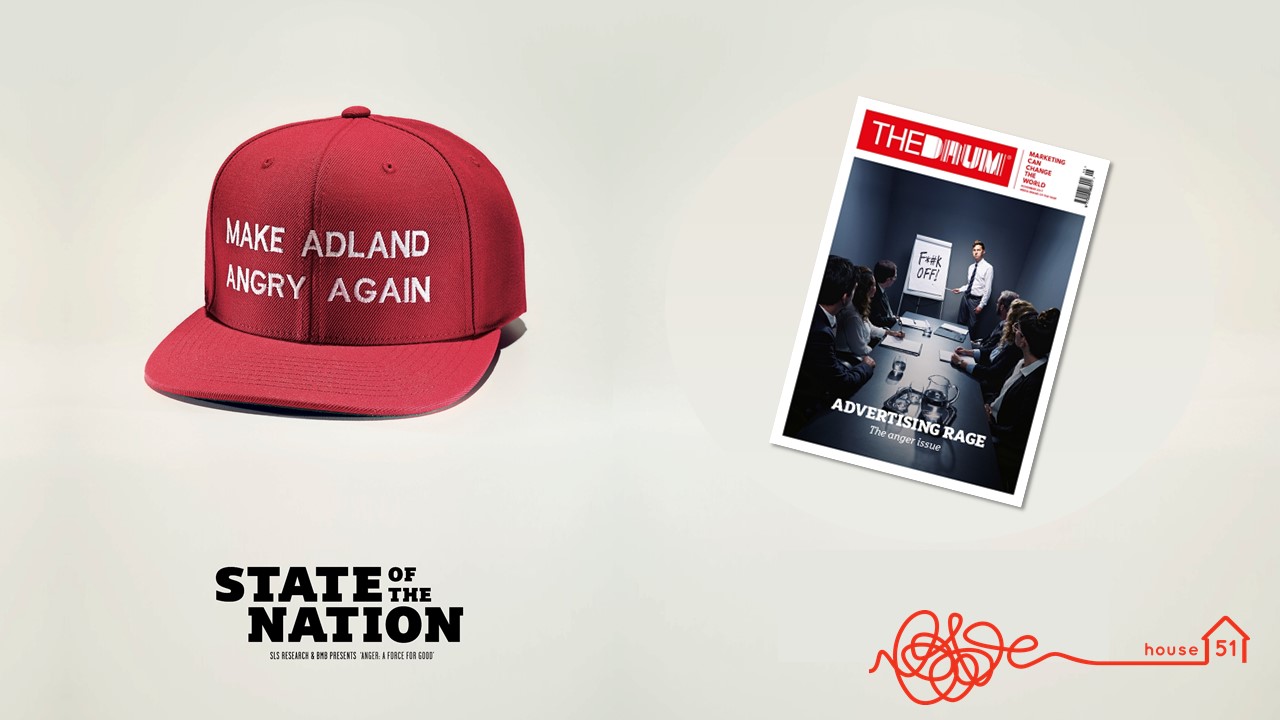 The news that there are a lot of angry people in Brexit Britain isn’t going to rock anyone’s world. We only have to turn on our TV’s and social media to see there’s enough anger around for everyone. But, when house51 got together with our friends at BMB to collaborate on The Drum magazine’s anger special, we realised that there was an untold story of British anger that rarely features in media and news coverage. Inspired by the latest academic research in psychology and behavioural economics we conducted a nationally representative survey of the UK population that set out to help marketers, researchers and the media think about anger, and angry people, in a fresh way.

Getting emotional
As behavioural economics and behavioural science have moved into the mainstream we’ve all become increasingly comfortable with the idea that human rationality has been overstated. 40 years of ground breaking science has shown that it’s actually emotion, the unconscious and ‘System 1’ thinking that does most of the work in driving our behaviour. This is neatly summed up by Antonio Domasio in his book ‘Descartes Error’:

But the vogue for the work of Domasio, Kahneman, and Thaler et al. betrays the fact that many of us still get a lot of this emotional stuff wrong. Most of the time we tend to default to a binary, ‘common sense’, approach which holds that some emotions are ‘good’ and others are ‘bad’. And anger is always in the ‘bad’ category.

Of course, reality is far more nuanced. And that’s the starting point for our survey: that anger is a misunderstood emotion, that people have got anger wrong.

We NEED anger
Media coverage invariably focuses on the toxicity of anger (aggression, violence, mental illness etc.). We didn’t set out to deny the negative aspects of anger. Rather we set out to highlight and reinforce the hidden positive story on anger to be found in the work of leading psychologists and anger researchers.

The science shows that humans need anger. For Paul Ekman anger is one of 6 ‘basic’ emotions (the others being joy, surprise, sadness, fear and disgust) that have evolved ‘for their adaptive value in dealing with fundamental life tasks’ (sex, survival etc.)

All of these emotions are ‘basic’ in the sense that they provide us with innate, automatic mechanism for appraising and acting on signals about our environment and the status of our goals. For example, joy tells us that our goals are being achieved – that there is something right in our environment. Anger tells us that our goals are being blocked – that there is something wrong with our environment and, crucially, it gives us the energy and motivation to fight for change. We need anger…

Beyond threats to ‘fundamental life tasks’, goal blockages can take many forms including threats to self-esteem or social status, competition over resources, injustice, inequality and violation of norms or values. It’s clear that all of these are in play in a big way in Brexit Britain. It’s easy to see why there is a lot of anger around. Irrespective of economic status or political orientation people from all walks of life are getting a lot of signals that their goals are being blocked…

Good and Bad anger
Anger is also an under-appreciated ‘moral’ emotion. For example, Van Doorn (2014) conducted a series of behavioural experiments where subjects were separated into an experimental (anger) and control (neutral) condition and asked to observe scenarios where money was shared unfairly between two people. Subjects in the anger condition show a significant preference for compensating the victim over punishing the perpetrator and were prepared to pay more money (than those in the neutral condition) to compensate the victim.

A range of similar academic studies have shown that anger is just as likely to be associated with ‘pro-social’ behaviour and concern for the welfare of others as it is with antagonistic or punishing behaviour.

And there’s an even more powerful build on the story of positive anger. We asked participants to complete the universal values questions that are used by the World Values Study. Our analysis shows that angry people simply give higher priority to pro-social values of universalism, benevolence and self-determination than non-angry people. And they are also much more likely to be angry about the way other groups/people in society are treated. These are certainly things you don’t hear on the news every day!

However, pro-social anger declines massively as people get older. While over half of those aged 18-24 were personally angry about the way a wide range of groups are treated in society (including women, Muslims, the unemployed, LGBT) the top answer for those aged 55+ is ‘none of these’ (33%).

This is where we need to ask if the absence of anger is really a good thing. The popular view understands anger as a disorder, a toxic emotion that should be suppressed in favour of calm and balance. By this standard, those aged 55+ are in a more desirable emotional state than those aged 18-24.

However, at our ‘State of the Nation’ presentation where we launched the research we concluded with the following question:

‘What’s the point of being calm and well balanced if all it means is you don’t give a f**k about anything or anyone else?’

We need a better understanding of emotions
The more general take out from our work on anger is that marketers, the media, policy makers and market researchers need to develop a deeper understanding of emotions. We talk the language of emotion. There’s a wealth of science at our fingertips. But we often apply it in a quite shallow and simplistic way. If we don’t embrace nuances and the full diversity of emotional response, we’re missing a trick.

Notes
• The research was carried out in conjunction with YouGov Omnibus. The total sample size was 1,050 adults. Fieldwork was undertaken from 8-11 September 2017. The survey was carried out online. The figures have been weighted and are representative of all UK adults (aged 18+).
• Podcasts of our presentation at BMB’s State of the Nation event are available here
• A full write up of the results is available in the November 2017 issue of The Drum magazine here